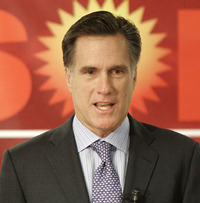 Mitt Romney, apparently struck with a fit of envy when he read Mark Sanford’s op-ed in the WashPost, shifted his Hummer into high gear in order to outrun our governor in speeding in the wrong direction.

Folks, this is the time to be finding common ground on a problem that we finally have a consensus about. It is definitely NOT the time to try to outdo each other in appealing to extremes.